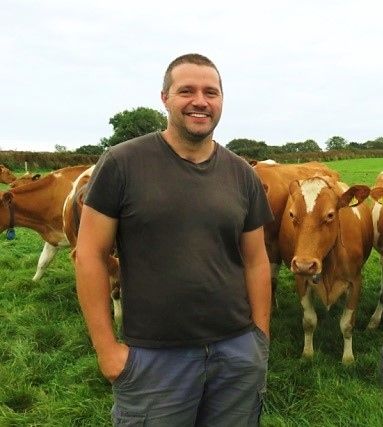 Michael Bray is one of the young generation of Guernsey farmers bringing innovation and business acumen that he developed farming in New Zealand and the UK.

Unlike many of our farms, Les Jaonnets wasn't in the Bray family generations before. When Michael returned from his travels, he put a notice in the local paper to look for farms for sale and before they knew it, he and his wife Susie were taking over the reins at Les Jaonnets Farm. The Farm is 100 verges, consisting of 55 fields.

The Martel family who were the previous owners hold a proud Guernsey farming dynasty so Michael had a lot to live up to. Their pedigree Guernsey herd was once ranked the highest in the UK for their milk yield.

Michael was keen to uphold the reputation whilst adding innovative practices learnt farming in the UK and New Zealand. He used recycled astro-turf to reduce mud carried into the farm and installed technology to allow rotational grazing to enable the cows to be outside more which has improved their diets. He has also re-seeded the land to introduce more grass varieties to the diets.

Since taking the farm on in 2012, the herd has increased to 130 cows and they produce 720,000 litres a year to Guernsey Dairy.  They now have the help of their two daughters as well as three employees.

"I spend more time with my cows than I do my own children. I know every single one of them"

As well as his herd, Michael also has a passion for the environment and biodiversity.

"Land management is crucial to the success of the farm but also to the local environment and I am always looking at ways that I can increase both grass growth and the biodiversity of unproductive areas as this has huge benefits for wildlife, flora and fauna."